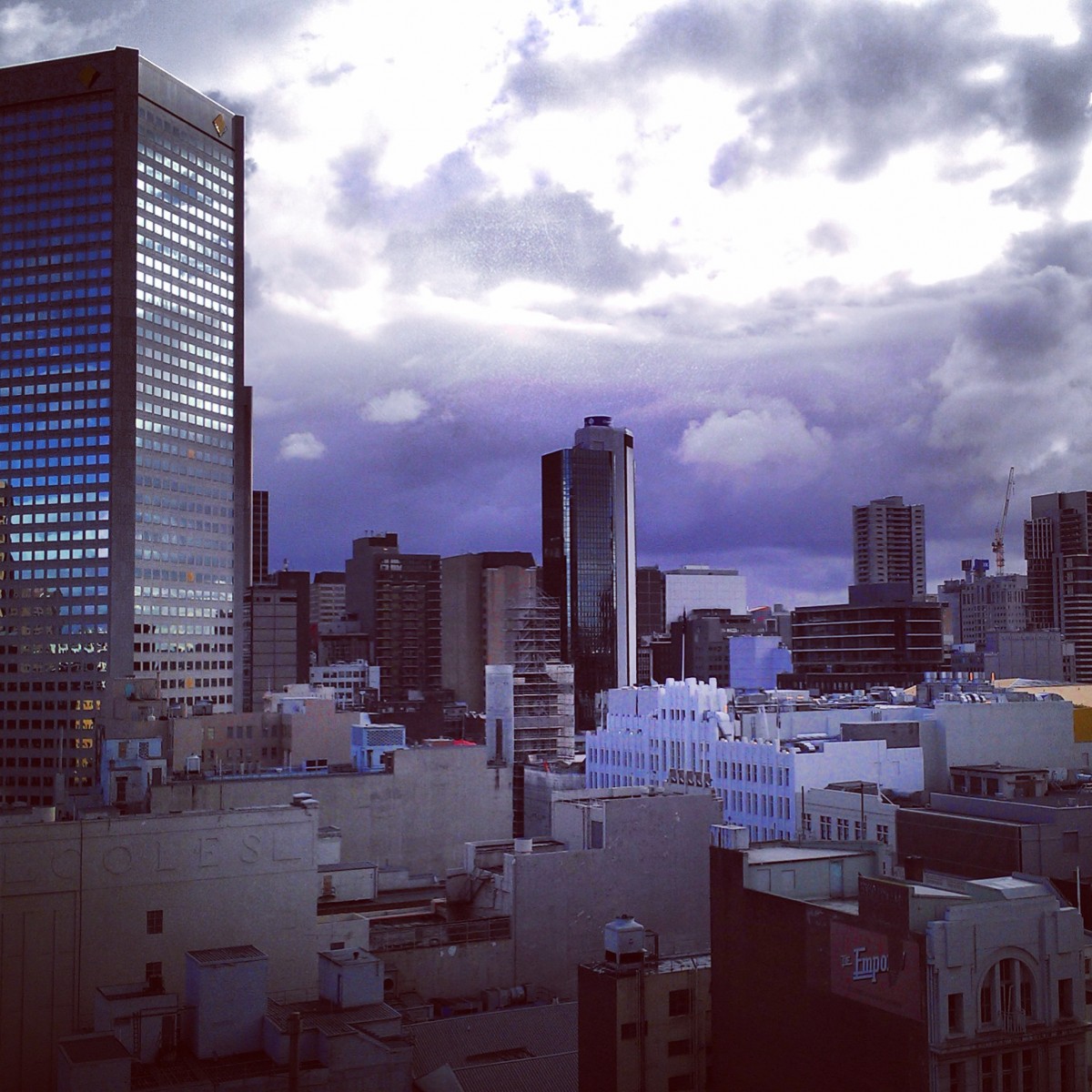 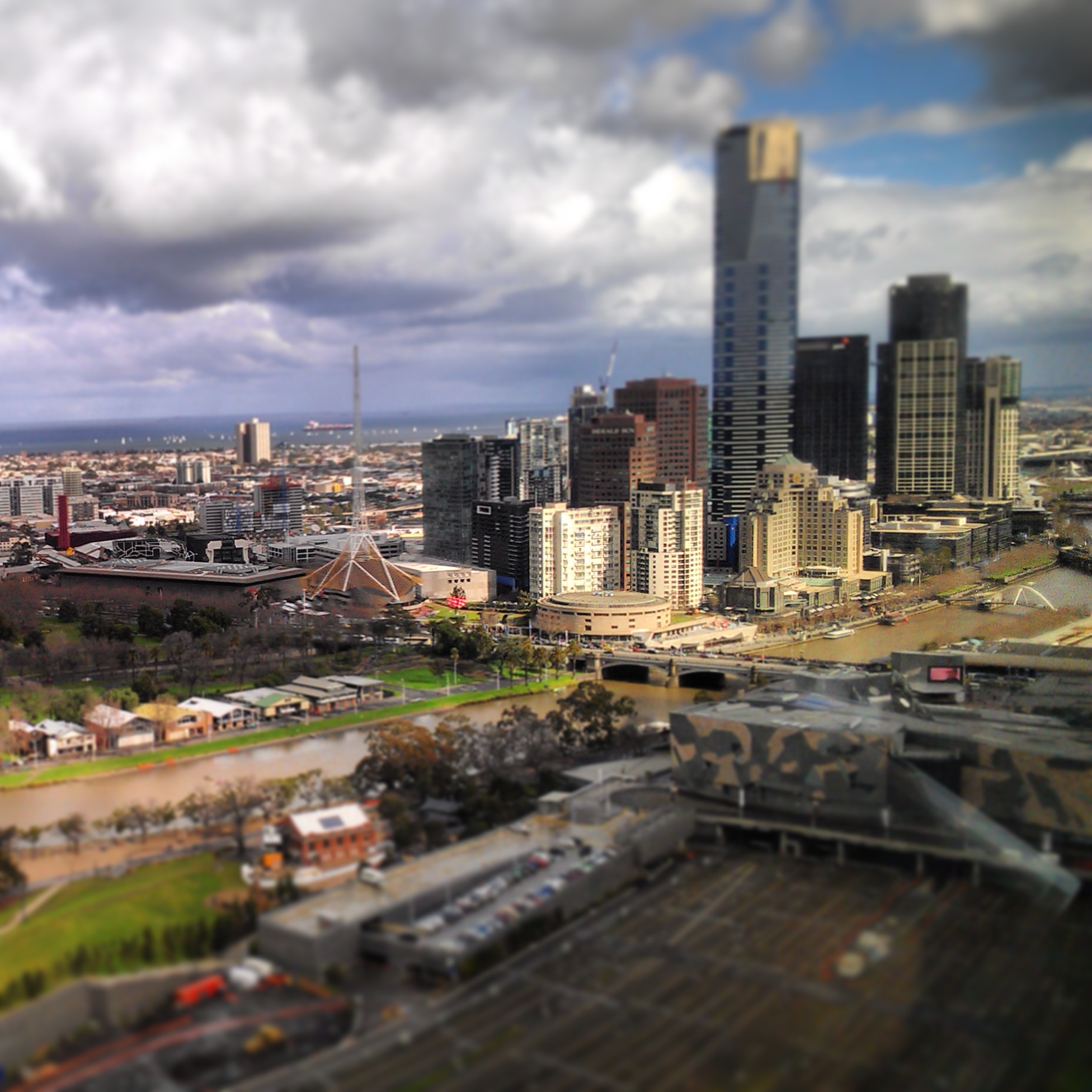 Urban anglomerate Melbourne is in full swing of its urban and modern trasformation. Massive and even 100 square kilometers spacious, it constantly complements and improves its physical existence. In the next few issues  we will try to give an overview of its urban structure and thus capture the important architectural achievements.”Down there” in the country, as some prefer to call Australia, Melbourne spreads at the southeast corner in Victoria. The largest financial center, which is, in addition to being the district capital, also the second largest city after Sydney, takes the primacy in its population in the seventies of the last century. The city was created along the Yarra River in the mid -19th century, with no significant history, but developing very quickly, thanks to the large gold findings in that period. That is the reason why many immigrants from Europe and Asia populated the city. The initial core, the so called Hoddle grid, was set by then British colony administration in 1837, representing the matrix for further development of the future metropola. It is a chess grid with rectangle dimensions of 1600×800 meters.The city began to spread to the east following the river up to Dandong Ranges, and to the southeast where it exits Bay Port Filip, following Maniboning river. With its growth, the most important buildings have occurred: Queen Victoria Women Centre (1848), Flinders Station (1854), State Library (1854), Parliament House (1856), St. Michael Church (1866), Melbourn Town Hall (1880), St. Paul Cathedral (1880), Supreme Court of Victoria (1884), Captol House (1921), Manchester Units Building (1929) and others. 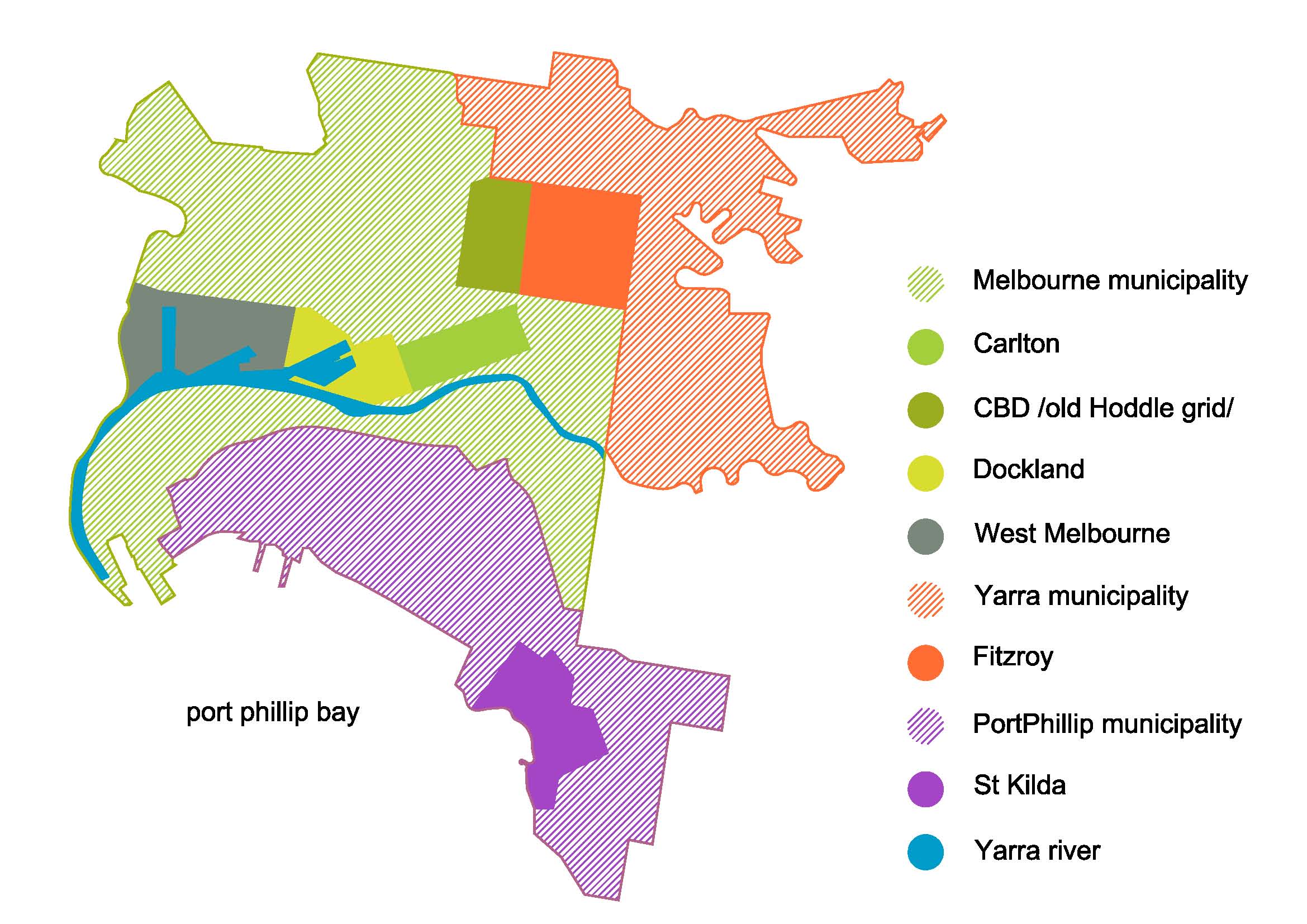 Today Melbourne is divided into 30 municipalities, which fall between three central administrations: City of Melbourne, Port Philip and the City of Yarra. Through these three municipalities we will try to capture the beauty and heat of the metropolis. Although close to each other, as urbanity, they clearly differ, creating with their originality and uniqueness special incentives for living in the city. Our movement would start from Central Melbourne, with the most distinguished suburbs as CBD, Carlton, Dockland and the area around West Melbourne. The Central Business District (CBD) is quite dynamic, tuned, hysterical at the same time. Walking through its wide streets gives you a feeling of flying sublimeness, a sense of a range of our time, which makes us vulnerable to huge skyscrapers, elegant mixture and purity. The mass of people constantly takes us from one semaphore to another, entering into the daily trance of the urban jungle. This section is characterized by large offices of multinational companies, which, through the storey height, compete for its prestige. Huge shopping malls, world-famous fashion brands, street musicians, the smell of various take-away restaurants that improvise the taste of the diversity of races and cultures, but also the well-known food chains, which confirm to us the Anglo-Saxon culture. Construction sites are everywhere and with their immense mechanization they capture the commitment to building. North of the CBD spreads Carlton, settlement created by Italian and Jewish immigrants, that have to this day retained their own cultural specificity. Due to their large number, the area is known as Little Italy. With a small walk along the Laygon street, you can taste the best Italian pizza and pasta, and of course, have original espresso, accompanied by the noise of mostly Calabrese dialect. You can note the substantially moving youth, since we are near the university area. The Victorian architecture from the Gold Rush period is very obvious, when actually the suburb was created. This authenticity spiritually fills the streets. From this point I use public transportation, renting a bike that is in the best way taking me into the city congestion. Protective helmet is mandatory, and along with the cluster of other bikers, we head towards the south.Through Laygon street we are heading towards Bourke street and follow the route up to the exit of the harbor, where the new Dockland is located. This is quite a new settlement which developed gradually over the last ten years, at the site of the former Victoria harbour. It was built very luxurious, with skyscrapers of residential and commercial character, representing a significantly large venture of the leading real estate companies. 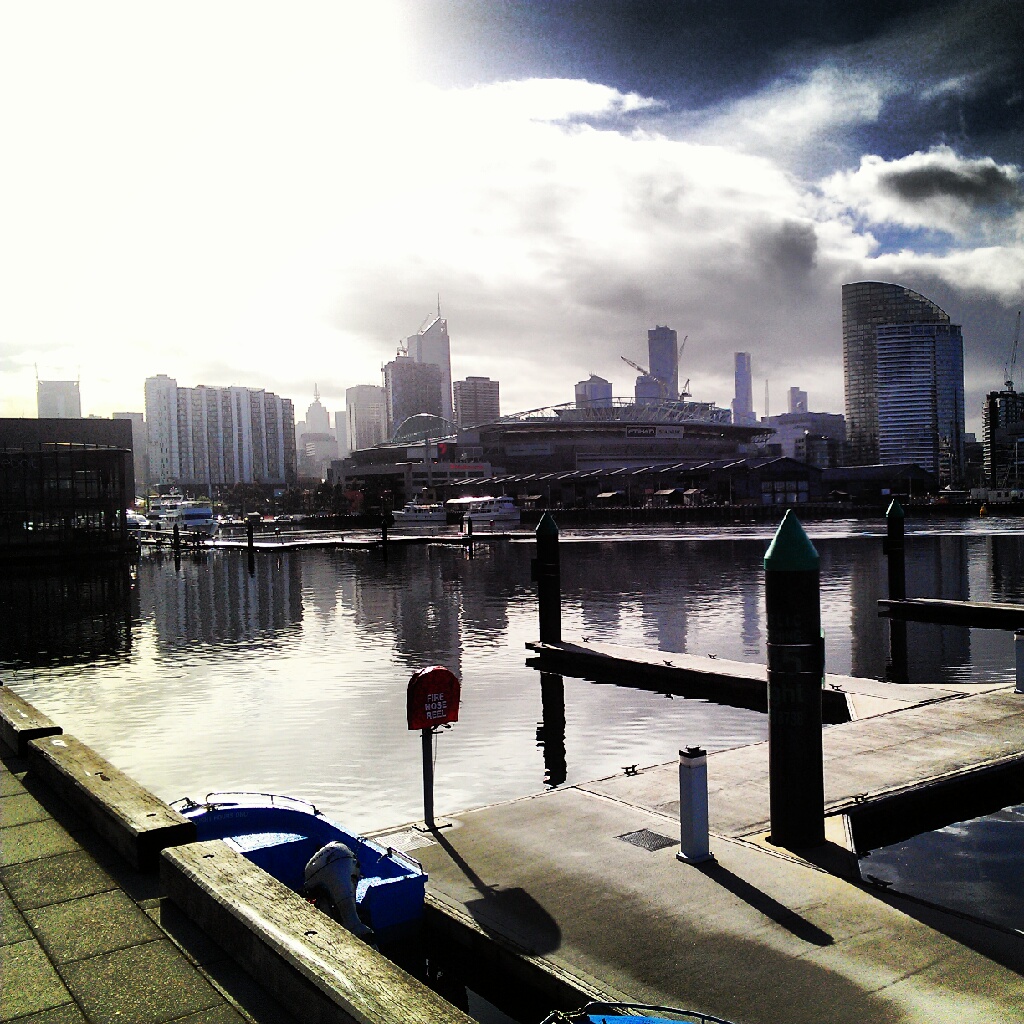 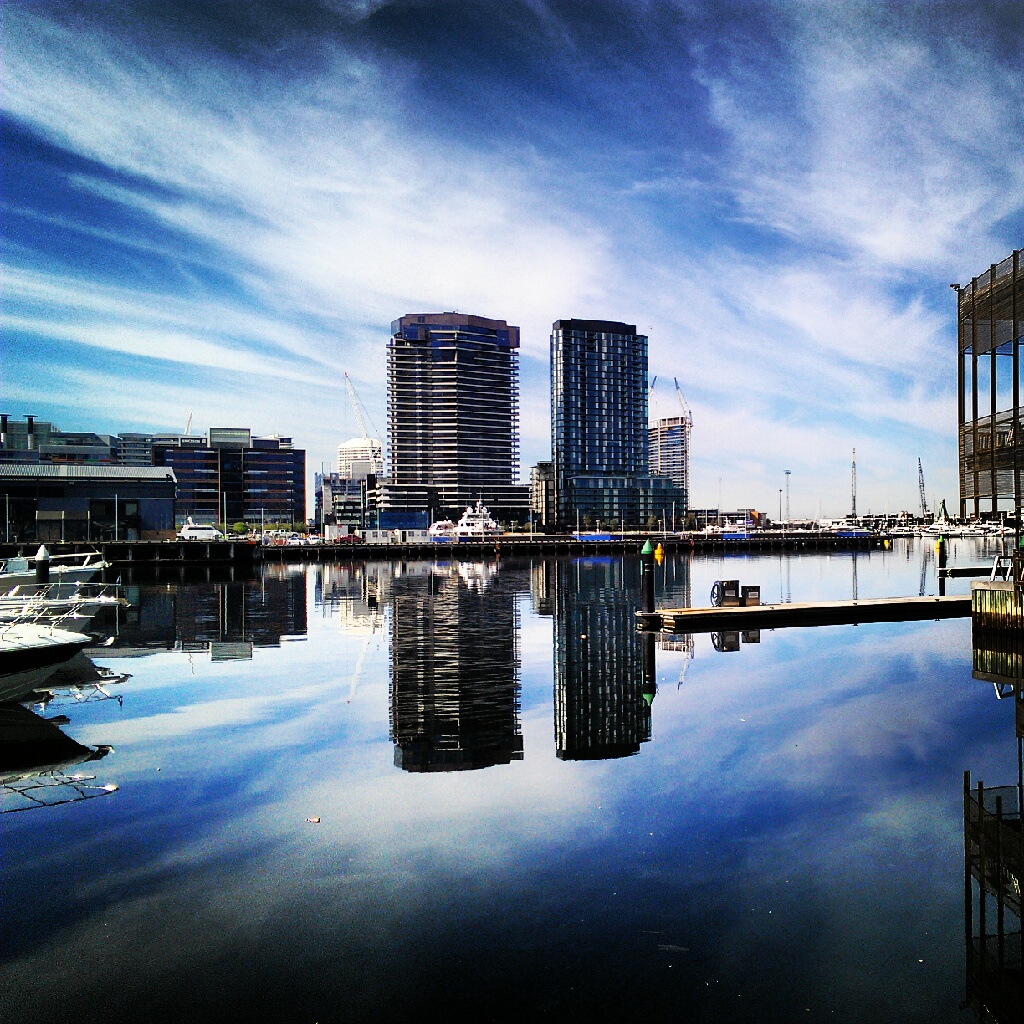 It captures high quality of life and standards, among other things because it follows the coast with beautiful landscape views of the bay and the Yarra River and the elegant port with luxury yachts. In this part there are several significant buildings that we will describe in detail in the following issues: Nab Headquarters, Dock 5, Webb Bridge, Tower 5 and 1001 La Trobe Street. The main features this District are vast abundances of urban landscape and art installations, which in the form of various shapes stretch almost across the whole water front. It is an excellent intervention and communication with the bay complemented by beautiful urban elements, bridges, parks, playgrounds, modern sculptures, areas for relaxation and other stuff. Some of the artists who intervened through their works are: Silence (Adrian Maurick), Cow Up a Tree (John Kelly), Anchor (Neil Dawson), Blowhole (Dunkan Stemer). Dockland is still developing and, unfortunately, you can not feel the great agitation as in other areas yet, but we all hope that once completely finished, it will revive. I return the bike to one of the staging service stations and continue to move with public transportation, which mainly consists of trams and outdoor metro. It is very efficient and accurate with lots of information at almost every stop. It is very pleasant while being used, as it shows the Melbourne everyday life, filled with chaotic flux of people, who are constantly rushing somewhere. The best way to observe their distinctive way of dressing, with backpack, Smurf hats and different styles of plaid fashion accessories. Teenagers are the most interesting, often seen wearing short sleeves and flip flops at a temperature of 5 degrees Celsius. The view to all different races and colours is beautiful, which are so mixed up that it makes it difficult to assess their identity; yet they communicate with the perfect Ozzie accent. 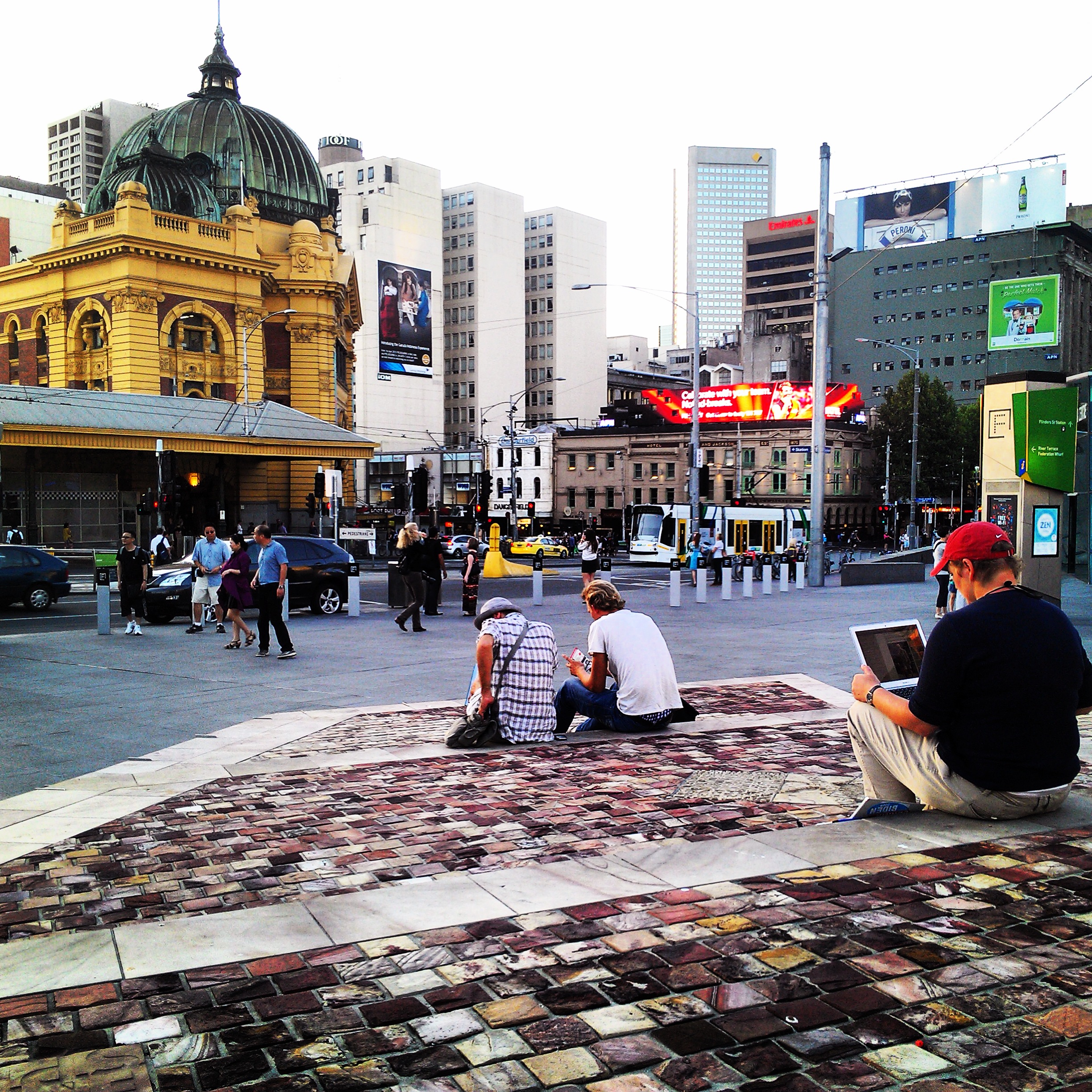 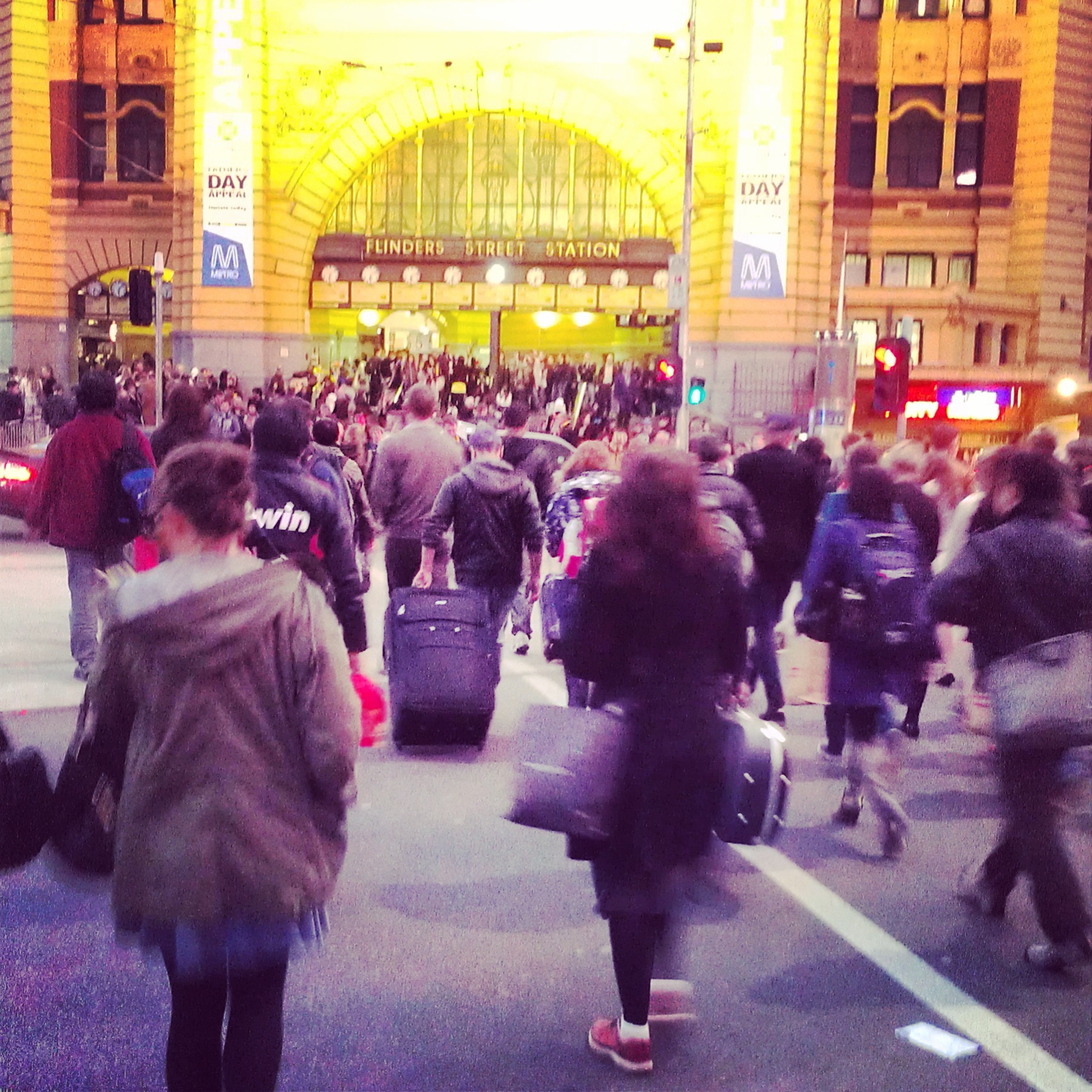 From Etihad Stadium through Cross Station we are heading towards Flinderstrit, from where to switch to the Yarra mynicipality. In Yarra, I have chosen the neighborhood Fitzroy as the most characteristic one. It is just opposite of central District, both anthropologically and physically, with low historic houses in Victorian and Edward style and Bohemian spread at the streets. Typical enclave of alternative movements, where it is literally possible to find anything. Here you’ll find handmade shops, hairdressing salons arranged ad hoc, mostly with old used furniture, garage used as a shoe store, factories turned into breweries and restaurants of every kind (both typical and atypical), social clubs. The overall ambience is complemented by street art, murales and numerous art galleries, from where we are moved by sounds of psychedelic alternative music. Perhaps the best evidence of it are the quite avant-garde bands Curse ov Dialect ( https://www.youtube.com/watch?v=8A-8DgWQlV4 ), Brothers Hand Mirror, and the most famous Architecture in Helsinki. Curse ov Dialect is a multicultural group of political rap music with ethno hip – hop based music image. The group is comprised of Maltese, Pakistani, Indian and Macedonian members. Their hit Bury me Slowly can most adequately present this urban neighborhood. Walking through the side streets you can discover lots of examples of quality architecture. Here I will mention the residential projects such as 32Kerr, Abito, and the Melbourne Museum. Moving towards Portphillip Municipality, what attracted our attention were the iconic buildings that already have deeply penetrated in the city DNA Melbourne Recital Centre (2008), National Gallery of Victoria (1960), Arts Centre Melbourne (1984) and certainly Federation Square (2002), an intervention on the occasion of 100 years since the Australia uniting. We continue in the direction of St. Kilda. This suburb is one of the major tourist attractions, thanks to its proximity to downtown and the beaches to the picturesque bay Portphilip. Lately, it is in revival and is a perfect hangout place. The breeze takes us, bringing the smell of the ocean. There are whale surfers on all sides, enjoying the stirred water, people sleeping along the beach and crowds of walkers who enjoy walking the promenade that stretches on forever. Beautiful greenery and typical palm trees enrich the overall picture. Sports are played everywhere and people are in great shape. Following the promenade towards the inside, on Oakland I Fitzroy street you will notice the incredibly full cafes and restaurants, and you can also enjoy the most important amusement park located there. What’s also worth paying attention to are Edgar Water Tower (1959), Palais Theatre (1927) and Princes Pier (1916). I go back sitting in a car on the right side, and I turn on PBS radio station (106.7 FM), a provider of independent and alternative music. Rushing along the streets, we are experiencing the fusion of Marvellous Melbourne. 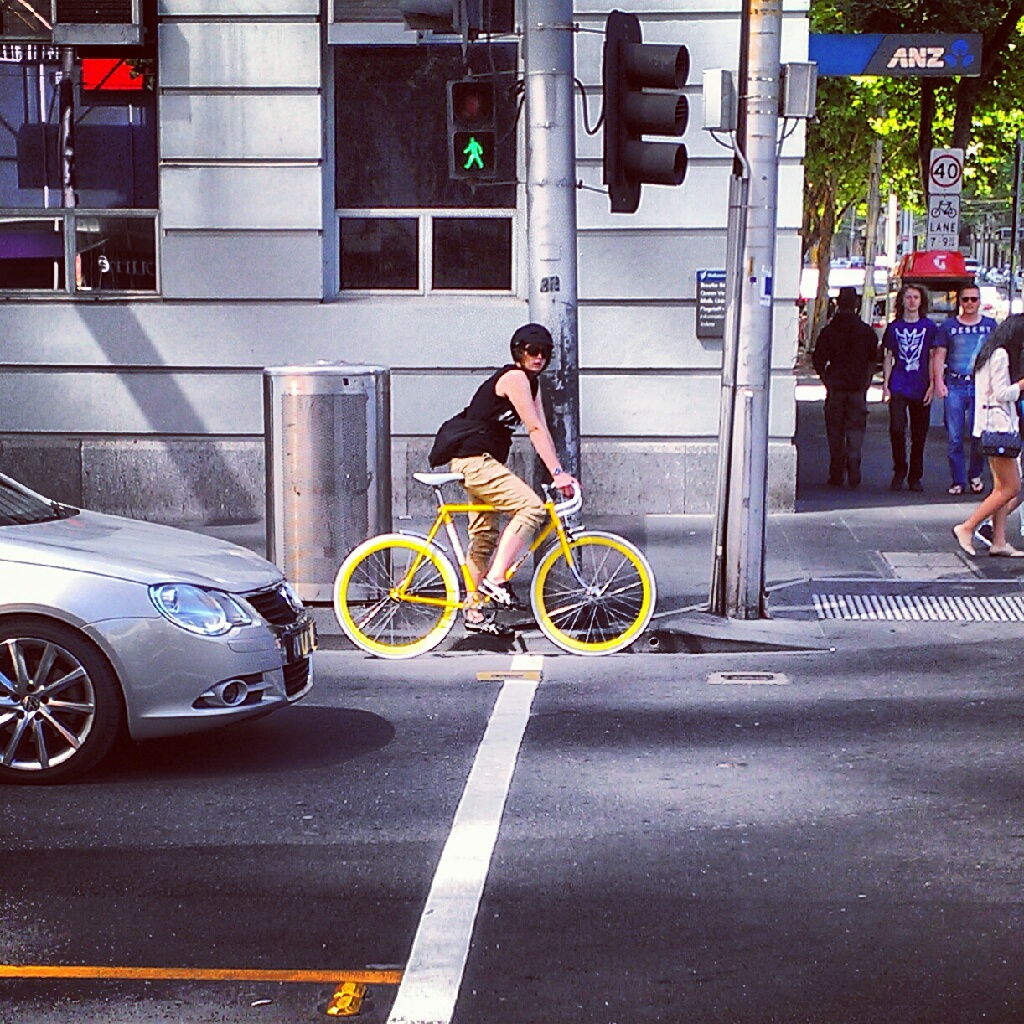 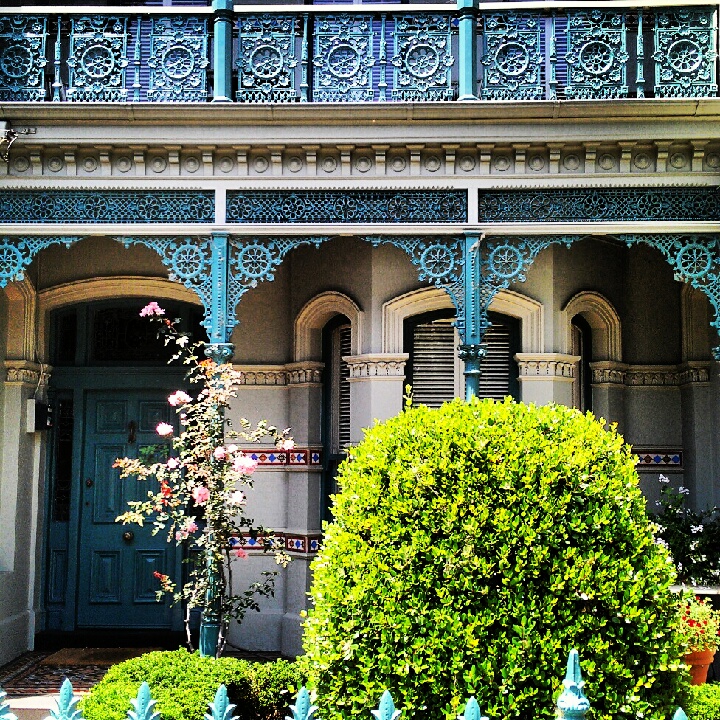 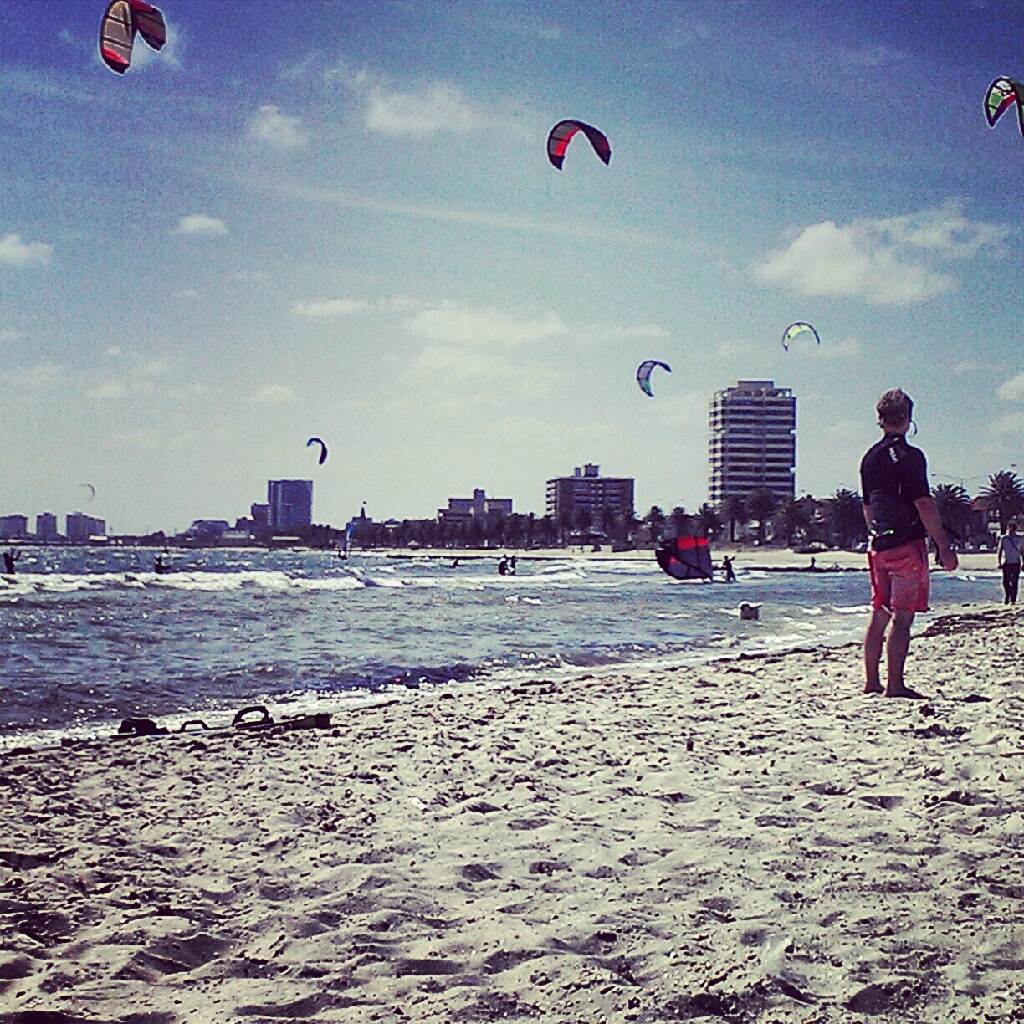