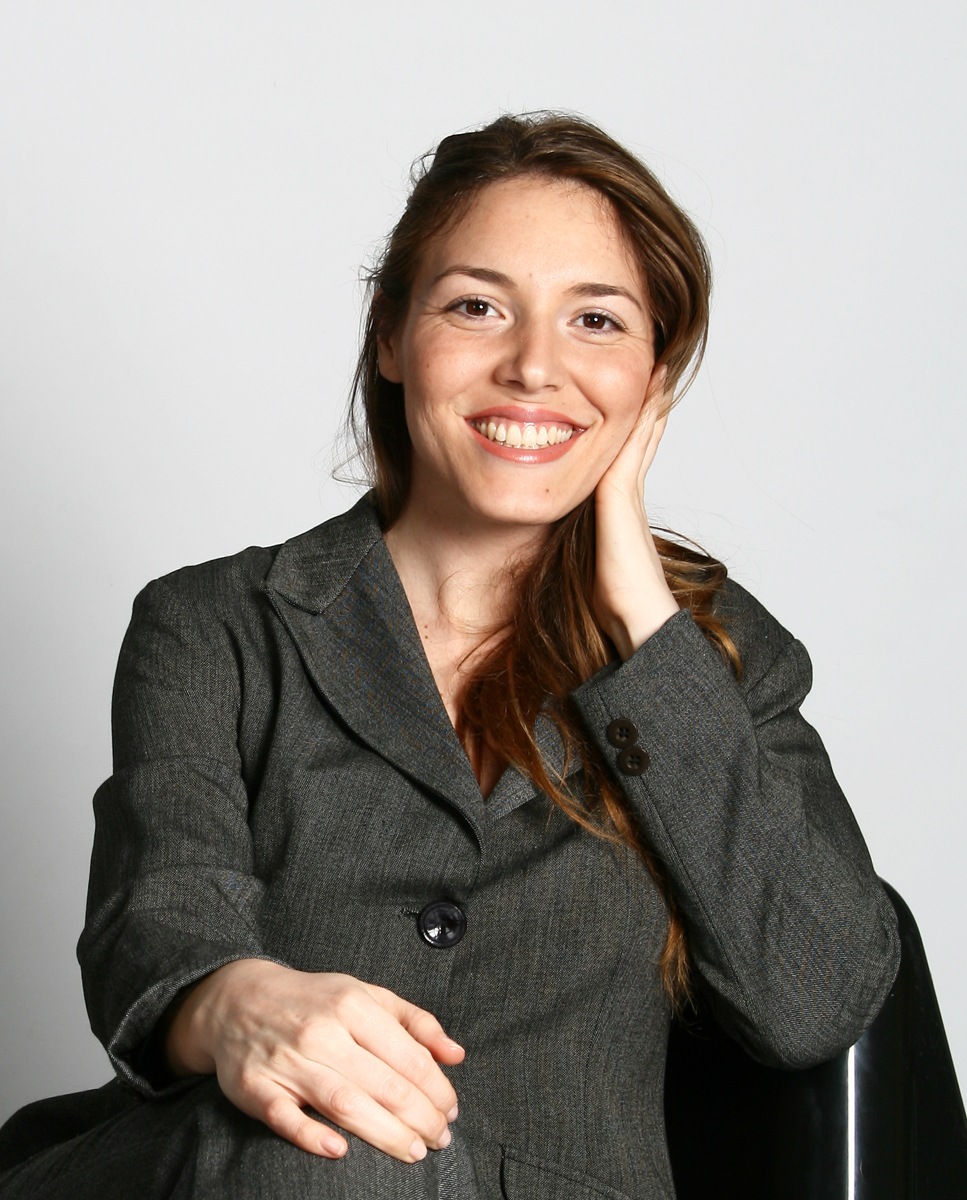 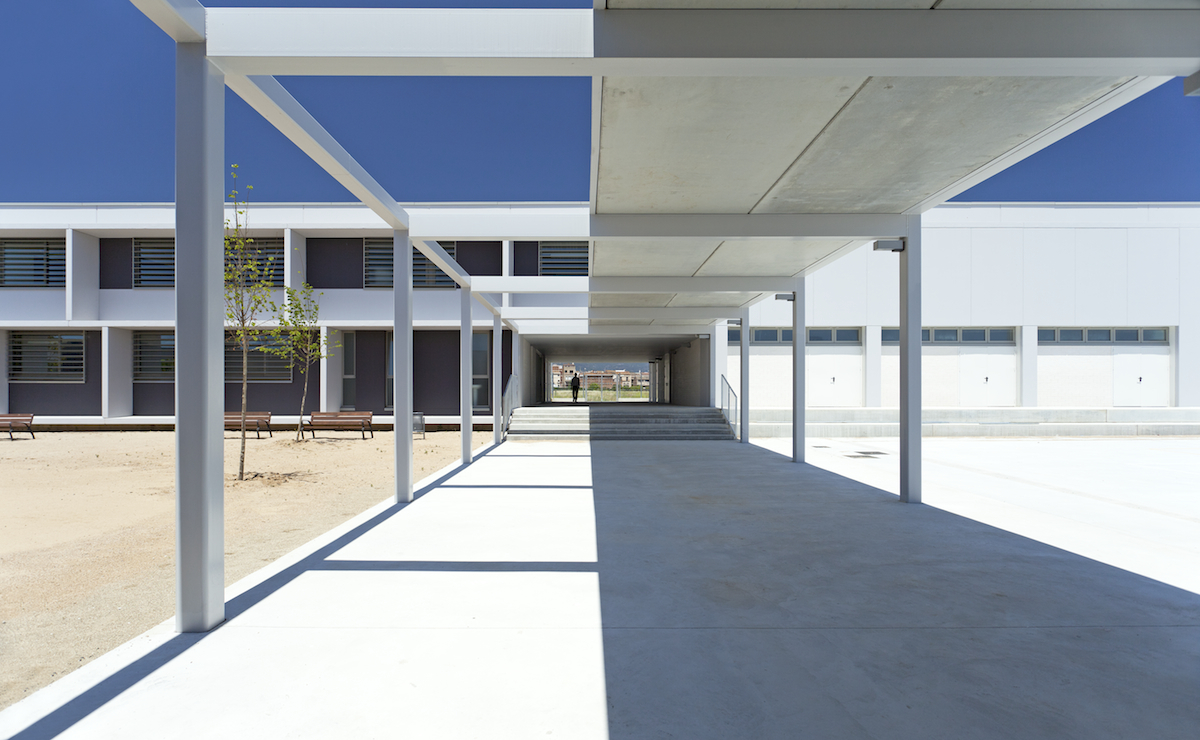 1.You have studied architecture at the University of Ferrara (Italy), but now you’re working has a photographer. Why are you more interested in seeing than touching architecture?

It’s a good question. At the beginning I was delighted by the idea of seeing a project of mine being built… thinking about spaces and seeing the interaction of light, people, materials, becoming architecture. Later I understood that I would have to wait a long time before I could see one of my projects constructed. I am an impatient person, and I couldn’t wait! I chose then to play with the architectures of others, to offer my view about how these architectures are relating with the surroundings, with people, materials and light. Photography always enchanted me, it’s present in my family since generations, I’ve started to take pictures when I was ten years old…

2.Your first working experiences were in Barcelona: among them, the office of Carlos Ferrater. How did you get adapted to their routine?

Ten years have passed since then… The good thing about working in big offices is that you can work with different scales, jumping from a project which requires more details, to the planning of an entire neighborhood. But what I most appreciated of this experience, was the chance to meet young and well prepared architects from the whole Europe, most of whom have already a good reputation. 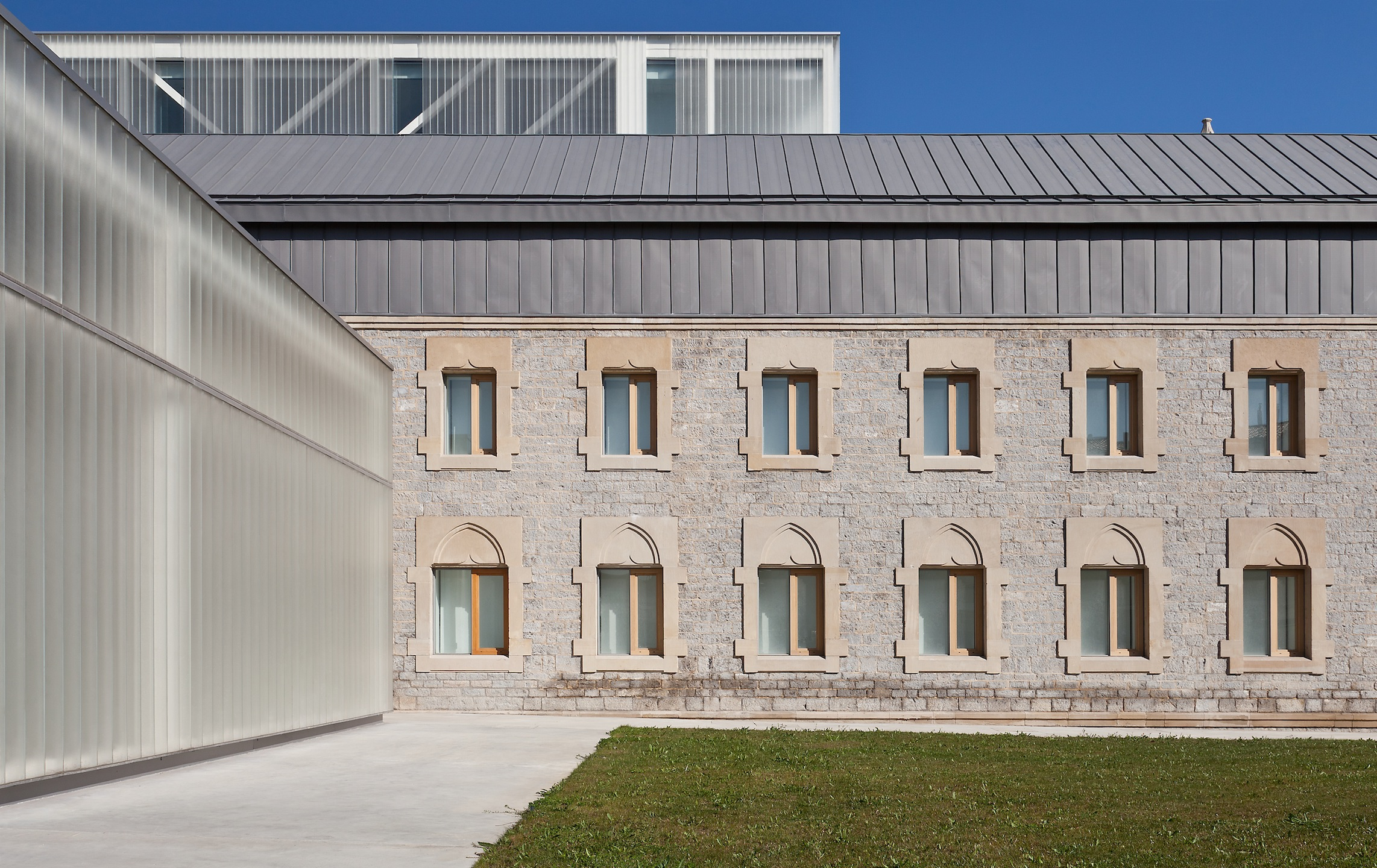 3. I remember very well a sentence from Mario Botta in a conference held in Milan Fair, while presenting his school: “Image is made to be consumed, architecture is made to last.”

It’s a catchphrase for sure, but I don’t believe that everything is black or white: there are beautiful architectures that aren’t made to last; at the same time, there are photographs which have marked the transition between two ages, which are the symbol of a generation, of a nation, of an historical moment. Maybe for Mario Botta such sentence reflects his own architecture, so solid and materic; but as I was saying, I think there are many ways of making an ephemeral, not-material based, light… ethereal architecture. On the other hand, I believe in this moment images have become a fundamental part of our society: in the age of Internet, we see huge amounts of images every day. We could say that they are, in a certain sense, “consumed”, but in another, they are an essential part of the representation of the society.

4.    Your photos remind me the work of Gabriele Basilico. In your case, in a colorful version. Clear objects, no people, wide-angle, perfect light and depth, very strong shades…

I really appreciate your comparison, Gabriele Basilico was for me a great master. His death was a great loss for all of us. He was to me one of the fathers of modern architectural photography. His interpretation of architecture in its context, his sensibility in understanding the cities, are some of the traits which have influenced photography for many generations. The presence of color is very important for me, it comes from my origins: my memories of Latin America are made of colors with maximum saturation, used in all their intensity: blue skies, yellows, reds, oranges… green and lush vegetation. If you take a closer look, the language of colors is extremely used in Latin American architecture: Niemeyer, Barragán, Clorindo Testa…Clear objects without persons, as you say… Actually, in my first years taking pictures, I was looking at photography as an architecture inside the architecture: the will to give a new interpretation of the building, playing with the geometry of shades, the interaction between light and materials, of the entire building with its surroundings, during the different times of the day. I thought about the human presence just as a reference of scale (like our sketches, sections, façades), as a dot, as the intuition of a presence. People are used to be photographed, they want protagonism… but I prefer that the building, the volumes, the pieces become the leading actors.More recently I’ve noticed, otherwise, that the presence of people inside an architecture can enrich a picture a lot… with a mood, the color of a dress, the explanation of its use, the livability of the spaces… we shouldn’t forget that architecture is made to be used by people, and not just as a pure and perfect volume claiming its own identity. 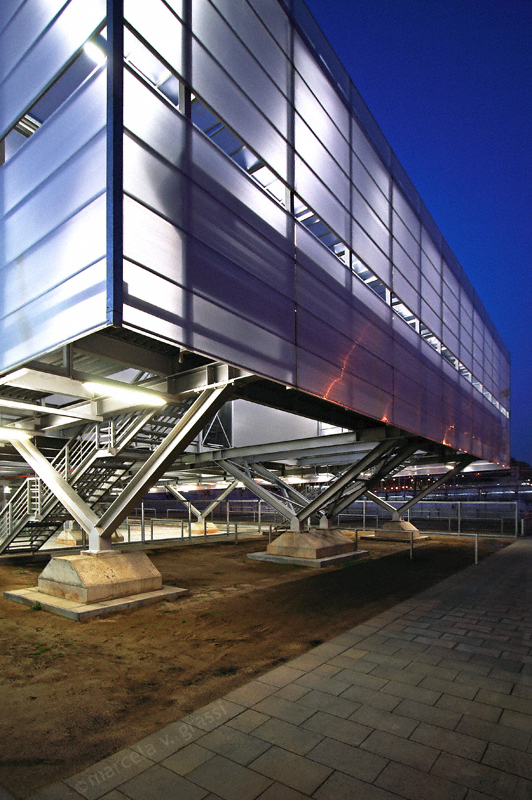 5. Do you listen to music while you take pictures?

I love that you ask this to me. Music is fundamental in my life, it has always been by my side. But when I’m taking pictures, I love to listen to the sounds that surround that piece of architecture, because they are part of its reality.After some hours, I feel I can perceive the very voice of the building: it shouts, it falls silent, it conceals itself… or dialogues… the sensibility of capturing the essential of a work depends also on your capacity of listening to it. During the pauses of a working session, the musical nuances which I listen can vary a lot: from jazz to 70′s rock…When I’m portraying, I don’t like silence: music is a part of my dialog with the model. In this case I like the music to be energetic, and for me the pure energy is rock. I’ve been growing up with grunge, it is the music that reaches directly my heart, and represents a part of me that will always exist… I confess that time ago I was tempted by the idea of making a career as a rock star! 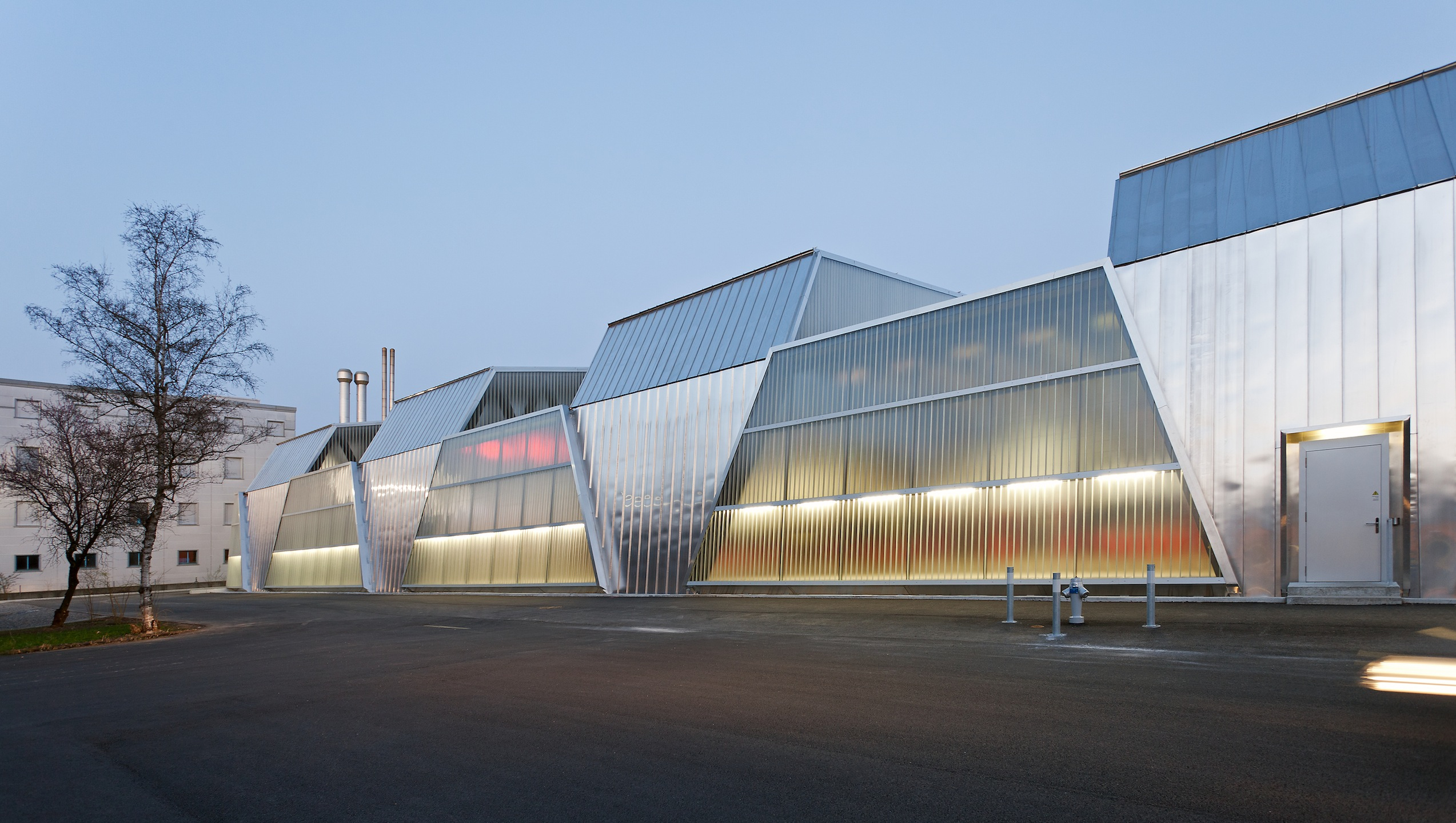 6. Which technique do you use? Are you usually editing photos for a final version?

At the beginning I was shooting with 35mm film. Since some years I’ve changed to digital photography. Actually I care a lot about the editing of my photos, since I want them to be an ideal representation, to underline as more as possible the characteristics of materials, spaces and volumes. Sometimes the building is not finished… in those cases one has to become in a certain way an “architect of the picture”, and to carry out the work that hasn’t been completed.

7. You have photographed architectural works from Miralles Tagliabue, Carlos Ferrater, BAAS Architecture, Ricardo Bofill, MAB Arquitectura, Battle i Roig…      Who among them impressed you the most?

I’m not going to answer this question! In each one of my works I always try to catch the best of each building, to give my own interpretation, even if I hadn’t take the same decision about the project. Each architecture needs it’s own vision: I think that a rational style can be enhanced by pictures that highlight its orthogonality and the spaces surrounding it. A more organic architecture is a challenge to the representation, because it demands that you alter your points of view, and understand how geometries, becoming sculptures, are interacting with the space.

8. Armin Linke is a photographer who looks at the architecture in a more critical way, but even so, he keeps the aesthetics and the beautifully surrealistic composition. Do you know his pictures of architectures from the Macedonian Socialism period?

Until today I didn’t know about the wonderful work of this artist, thanks for letting me know about that. The Macedonian socialist period created beautiful and amazing architectures, really fascinating and fantastic. They make me think about futuristic cities conceived, who knows, by Isaac Asimov… It would be interesting to get the chance of giving my interpretation about them.

9. How did you feel while photographing the work of Oscar Niemeyer in Niteroi, Brazil?

The journey to Rio de Janeiro was in 2007, right during the centenary of his birth. Photographing his work was for me an unbelievable emotion, but it also marked the moment when I decided to devote myself to photography. His architecture reflects the Brazilian culture: his organic forms remind the curves of nature, its vivid and pure colors, remind the tastes of the tropical fruits, his sloping accesses invite you to enjoy the landscape more slowly, almost dancing at the rhythm of samba…I deeply admire him, not only for the wonderful architecture he gave us (in this case Mario Botta is right, it is an architecture made to last…), but also for his vision of life and society. His loss created a great emptiness in the modern architecture, and especially in the ideology of a social architecture. 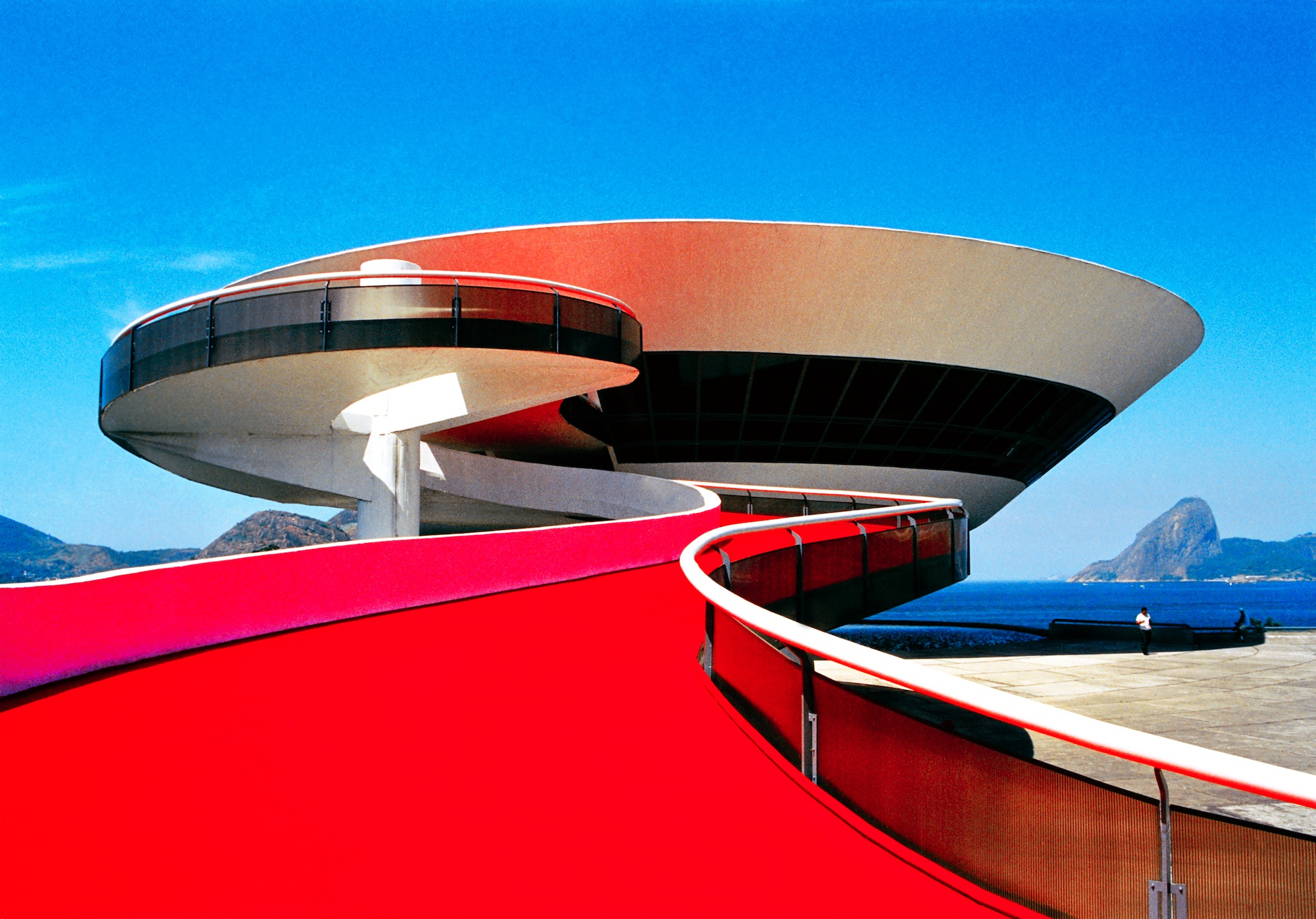 10.Which is the importance of the urban scene in the composition of the  photographed architecture?

As Gabriele Basilico taught us, I believe that the urban scenes are a fundamental part, if not in the design of a building, at least in its representation. I think that the relationship (dialogue or contrast) with the urban context is one of the bases of modern architecture.

11. You are born in Argentina, you have studied in Italy, and now you live in Spain. How all these phases influenced your creativity, maturity and success as a photographer?

It’s a very appropriate question. My multi-cultural formation was essential to define my identity as a photographer; every country where I lived provided my photographic interpretation with a different nuance, and a new tone.From my years in Argentina, as I said, I’ve conserved the strength of colors, the intensity and purity of the blue skies. On a human level, I conserved the idea of friendship as a deep, familiar, and eternal relation.From my years in Italy, apart from my studies, I’ve conserved the importance of context and history, the appreciation of the great masterpieces made by classical and Renaissance artists. I feel very lucky to have studied in depth the Italian art, which left us an immense cultural heritage.Now that I live in Barcelona, I can’t say that this city fully represents the Spanish culture… but I can say in which way it has influenced my photography: the great importance in the design of public spaces was a primary lesson to learn how to read the empty spaces of architecture: squares, streets, parks… you need a different point of view, to understand the essence of this kind of projects, and I continuously keep on understanding different nuances. Another aspect which I admire, respect to the Italian and Argentinian society, is the higher level of freedom and equality for the status of working women, even if there’s still much to do to reach the standards of northern Europe countries.

12.Barcelona is one of the three hotspots of architecture in Europe, together with Rotterdam and Basel. How much did this city enlarged your horizons on your work?

As I said before, the lesson of Barcelona about public spaces was very important to me. In my opinion, the Catalan architecture school comes from a tradition which privileges the construction and the detailing, the honesty of materials; respect to it, the school of Madrid promotes research in architecture, and the exploration of new ideological and formal limits, maybe with a higher level of design freedom.The luck of living in a culturally dynamic city as Barcelona, with a strong identity connected to the design, is an opportunity to enrich continuously my vision of art and image, and to compare it with new vanguards. I live in a former industrial neighborhood, the area 22@, Poble Nou, which is under a constant evolution (sometimes coming close to the threat of speculation). The chance of living at short distances from new emblematic architectures brings you to think constantly about how to photograph, to read them, to listen to how they relate with each other; until you know them, as old friends.