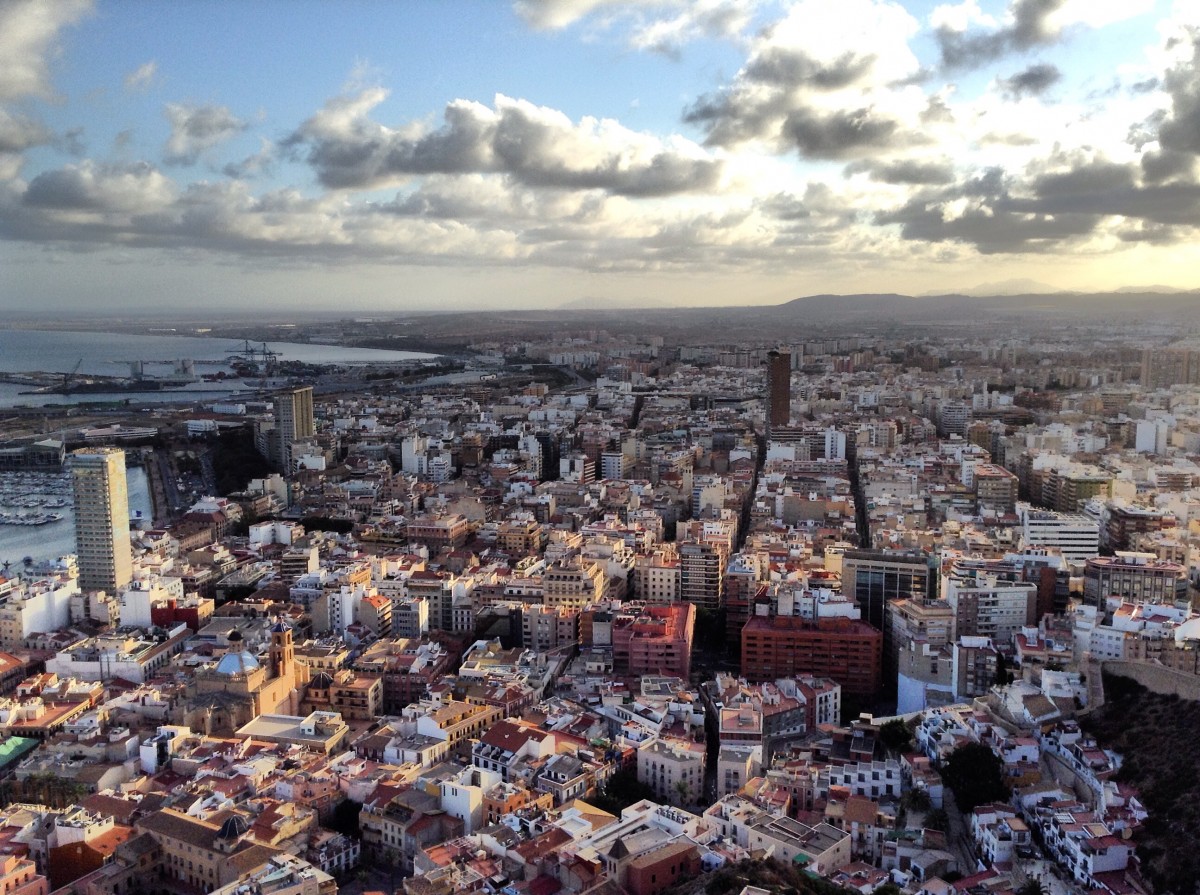 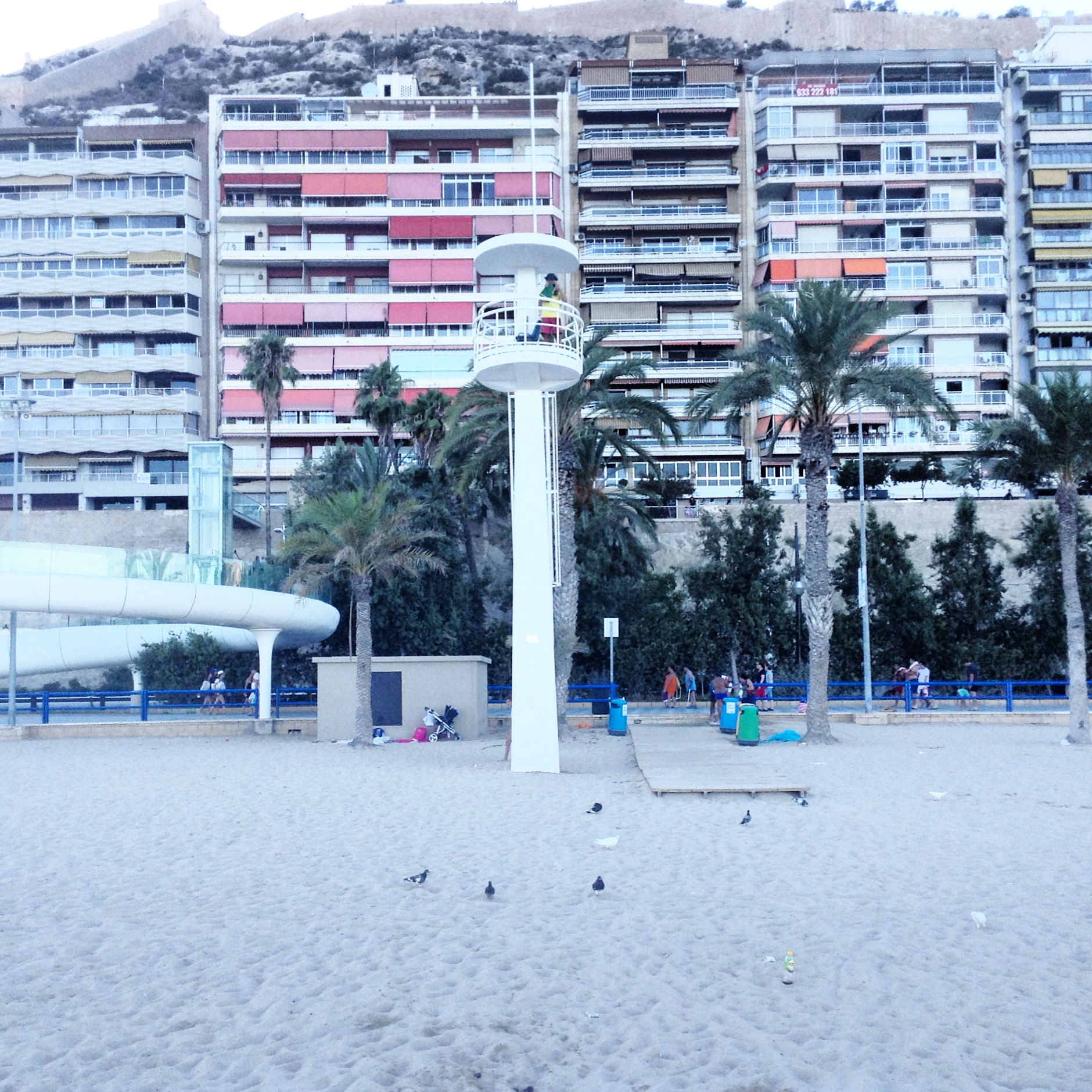 Impressive and titanium scenery characteristic all along the Spanish east coast. Non-stop city that is developing at a linear length of 8.000 km, from Costa del Sol up to Costa Brava. Dashed urban line that usurps the entire coast, with small breaks inbetween the natural reserves and rocks that prevent the total conquer of the concrete mass. Space that occupies only 4.25% to the total territory and is inhabited with 44% of the population.

This apparent enforcement of the coast started in 50-60-ies of the last century, in the full swing of Franco’s fascist model of development. It usurps any logic in the service of social capitalism which is partially pushed through both the tourism and the real estate market, where its rise began.

The vision of superstudios “Continous monument” (Continous monument, 1968) dates back from then, and in 1972 they deepen the same themes through the Seventh city [band city that is constantly produced]. Although the aesthetics is utopian and differently composed, they manage to predict this impact. 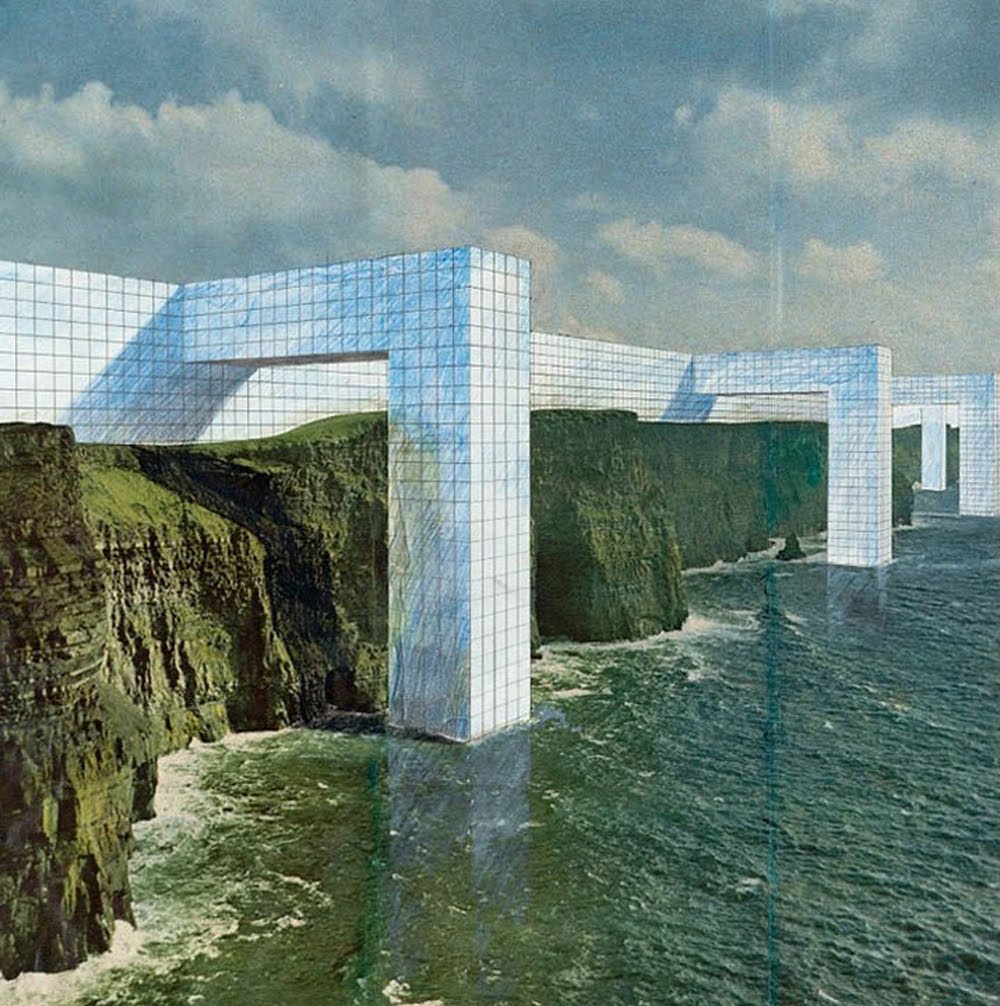 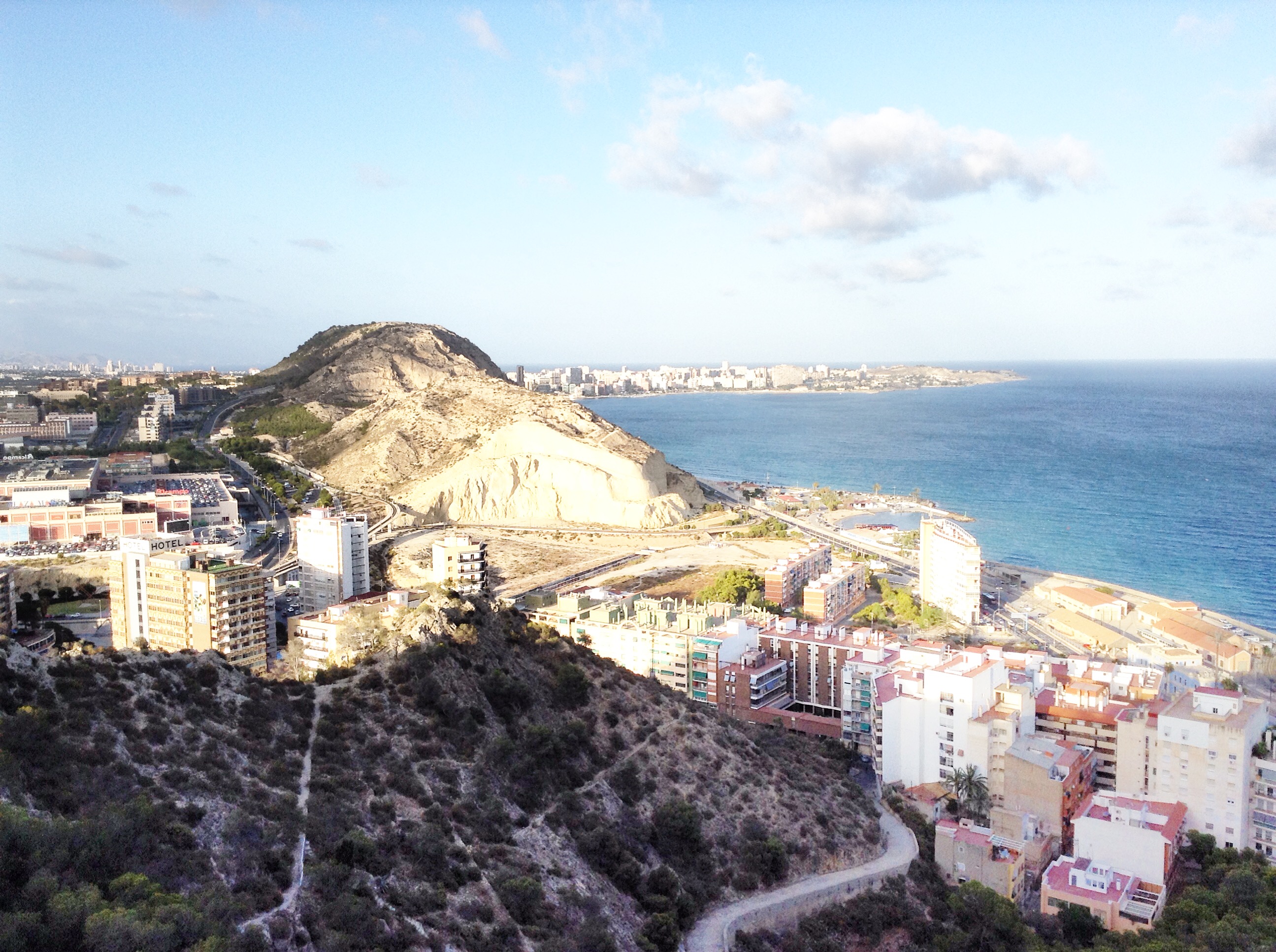 In this text I will frame only part of Costa Blanca, the whole scope of Cartagena up to Culp, since the intensity culminates in this piece. Sharp stretch that draws the marine width in all its splendor and luxury, and as some urban wall divides the barren and rocky white scenery in the background. A contrast that is difficult to balance with the charm of the Spanish tradition and coexistence.Certainly, the two major hot spots, Alicante and Benidorm, are most remarkable in this axis.The first classic Mediterranean city with Roman and Arab historical setting, additionally ubanized and merged to the late last century. Rigid skyscrapers placed an ad hoc follow the shore and the sun, while the space inbetween is filled with massive tourism villages and summer residences. The newer generation of Iberian architects who are among the better in Europe certainly give hope, by managing to unite these dense corroded urbanities through surgical refinements and interventions of connection, mostly through the landscape, the ground area and greater availability of the public space with tame vegetation content. Something very beautiful and typical of this theme is the connection of the urban core starting from the Albufereta beach until the neighboring San Juan, a few kilometers of well organized waterfront with pedestrian and bicycle paths with beautifully created details within the surrounding rubble. They really evoke optimism that there is still hope for the common sense to conquer through these bulky and ugly urban masses. 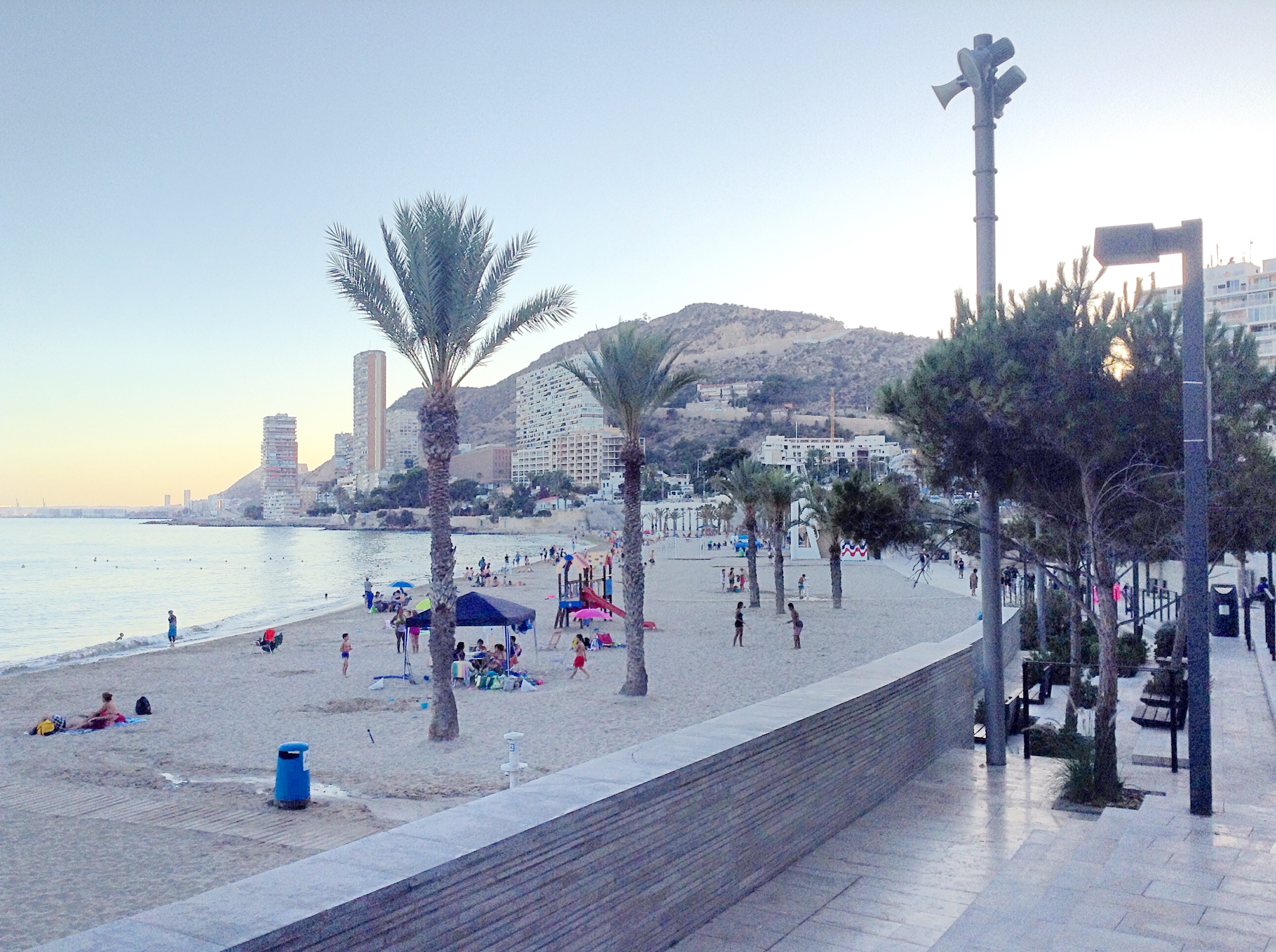 Benidorm certainly is the second node that could be hardly described by any standard or definition of education.

By the early 60s is a small landscapy village in a picturesque Mediterranean style. The then ambitious mayor Pedro Zaragoza begins its expansion, adjusting the whole area Hyera Hellada from agricultural to urban land. Within just twenty years it become one of the most developed tourist destinations with urban character, and represents a unique tourist model, the essence of which up to the present day seem like an illusion (mirage on the former village). In fact, the idea of ​​thematic tourist attraction prevailing as concept in Benidorm is actually the city itself. A course that spreads, giving a seemingly impression as if all subsequent Latin American cities were born here.

Inserted in a map of a triangle, it is expanding throughout the years along the front track at width of 100 meters along the coast following the beautiful sandy beach and the clear Mediterranean Sea. Curious are its atypical skyscrapers, which actually represent hotel structures that draw the capacity for tourist beds. While playing on the height card, they are not characterized by lavish and luxury shirk entrances and glass siding facades, being much cheaper with their massiveness demonstrating through monotonous forcing of storey/floors, which makes the place more competitive and affordable for every pocket. Scattered like that, these cubes are set in idyllic surrounding Mediterranean landscape which sets the paradigm and functionality with beautiful sight it consumes by and towards them. Somewhere between the most notorious INTEMPO skyscraper can be seen, a symbol of the collapse of the construction boom. The skyscraper became famous as shocking news on the world news as a building with no elevator, which through the period of countless urban speculation (the object has grown from 20 to 40 floors) loses the most important communication. 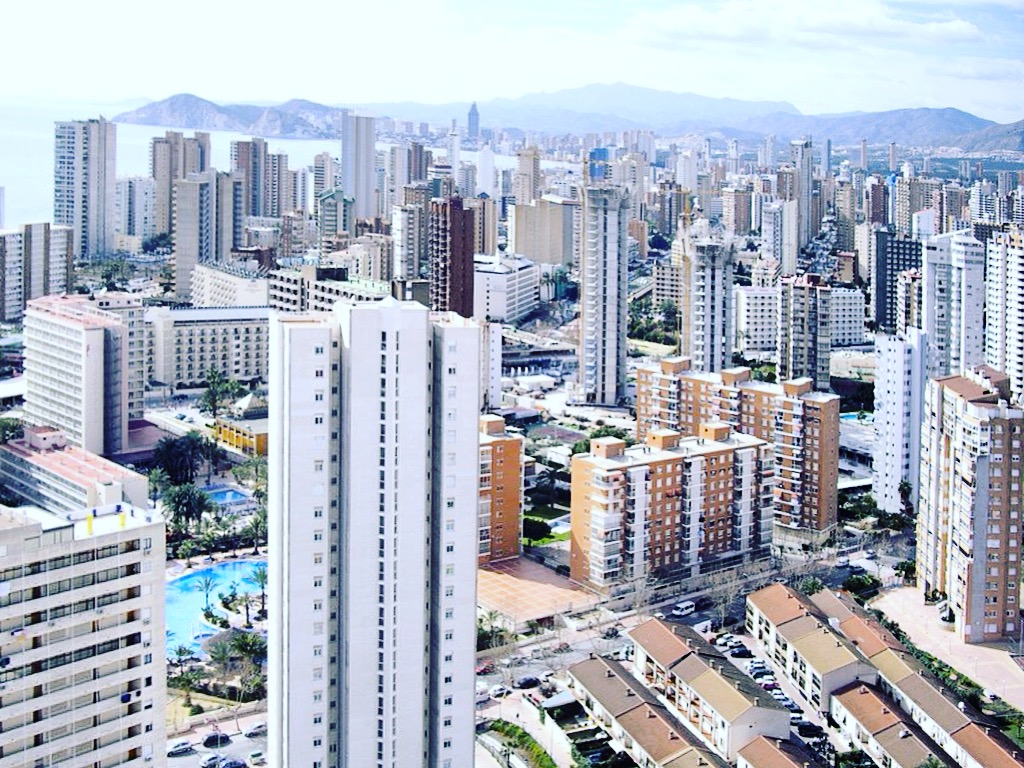 This kind of expansion affected its fantastic population/density, which can go up to 2 million tourists in the summer season (from May to September), an average of 400.000 visitors per month. Of course, this density varies in the other periods of the year, when the city barely counts 100.000 inhabitants. This overload sets the illusion of an Asian more than a European city. Although varied, this resort core manages to live year-round. It is quite impressive that in terms of too crowded, the water remains crystal clear and the beach is clean with bright and fine sand. At the end of the day, that is its strong natural resource which manages to attract so many tourists (along with the adjusted prices and offered fun).

Benidorm is a kind of massive basin which generates, but also repairs the economic crisis that gripped Spain. With such production at the construction market, it is the main cause of the bubble (bubblescapes), which generates the banking collapse in the real estate that can not be sold even at record low prices, regardless to the fact that the tourism continues to show an increase (tourism fictitiously increases the GDP, but employs only seasonally). What can be the real future and sustainability of such a hyper active tourist development that requires further victims who are becoming increasingly exhausted?

Although this city is a paradigm, the sense of being part of it is wonderful. I had no idea that it can be so appealing with all its beautiful contrast between the Hispanic food and tradition and environmental construction synthetics. 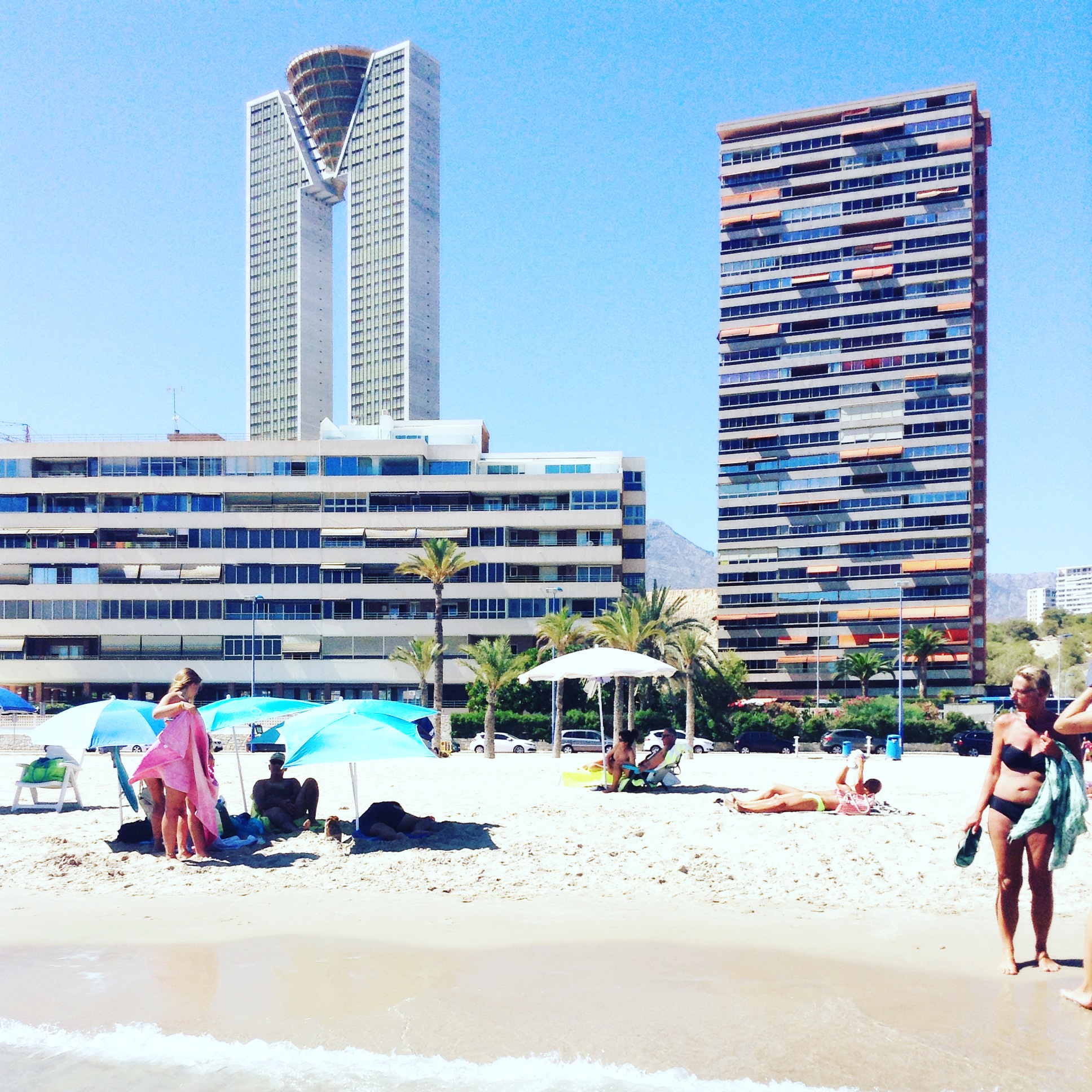